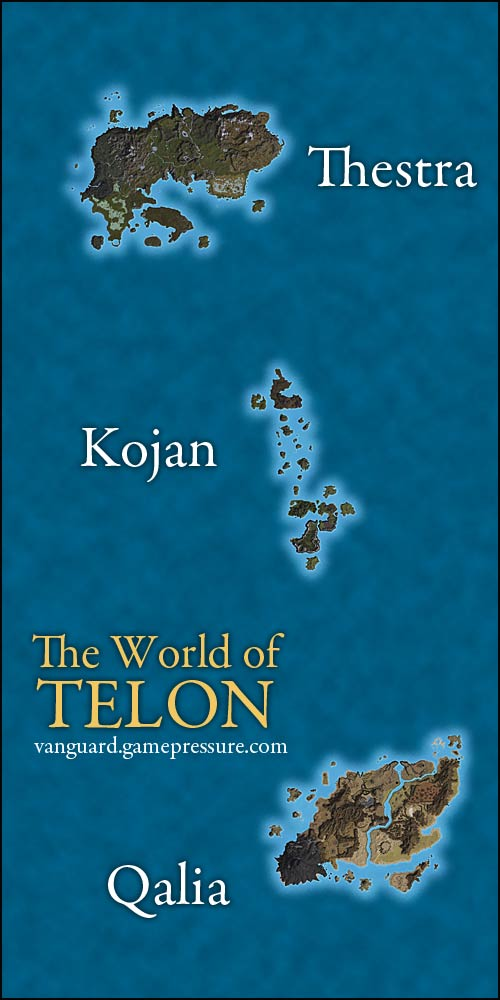 Vanguard: Saga of Heroes takes place on the world of Telon. Although most of Telon is still a mystery, players have a choice of three starting continents:

Each continent is separated into different smaller areas called chunks. The player can move from one chunk to another by simply running in the direction he wants to go, when he gets to the border, he will notice a loading time before accessing the next chunk.

To help you navigate through Telon, you can either take a look at these Chunk Maps or if you already know the chunk name, you can click here, to get to the chunk name list.

Each continent has capital cities where the player will be able to find trainers for adventuring, crafting, diplomacy or harvesting, as well as bankers, vendors and brokers.

There are 19 playable races, each have their own unique racial ability, customizable attribute point makeup and special racial bonuses to crafting, harvesting and adventuring.

Each race starts on one of three continents: Thestra, Qalia, Kojan, or on the Isle of Dawn.

The player can walk or swim to travel around Telon and he will get nearly everywhere. To speed up the journey there are different buffs that help to run faster. It is also possible to get:

Things to kill or be killed by.