Difference between revisions of "ZAYGIUS" 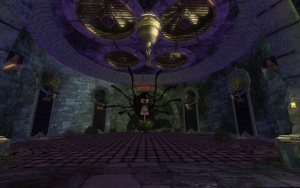 The fight consists of the tank attacking from 180 degrees from initial approach to mob, he gets agro and the raid moves behind the mob at a 5 meters distance.

A small AoE damage from Zaygius does more damage the farther you are from him.

Zaygius cast a Cone shaped frontal curse that petrifies. Set a designated de-curser to remove them, preferably a necromancer (instant-cast).